skip to main | skip to sidebar

The Economist magazine has a piece this week entitled "Patent Fiction". They take issue with the findings in a Thomson Reuters' report "China IQ (Innovation Quotient)" that looks at the latest data on the growth of invention patent applications. 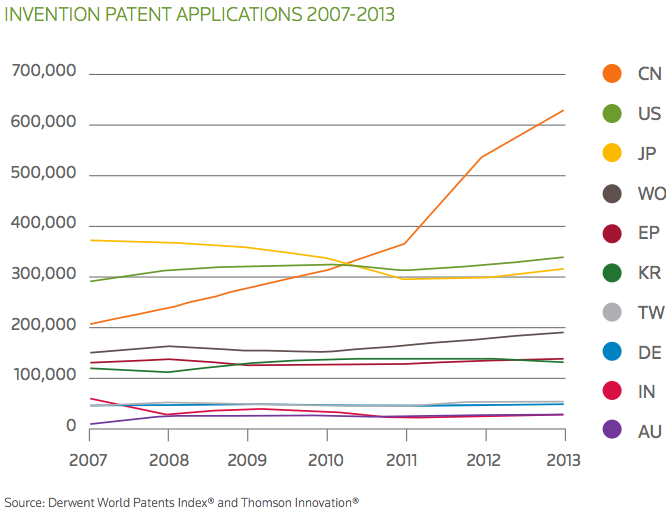 It is funny how they trot out the old quantity-versus-quality cliche. I predicted that response 4 years ago when this shift was becoming apparent. It indicates a dangerous level of complacency.

Richard Bruton, the Irish Minister for Jobs, Enterprise and Innovation, has announced that Ireland will host a local division of the Unified Patent Court (UPC).

The UPC is a key part of the Patent Package that is currently in the process of being ratified in Europe. Its adoption depends on ratification by 13 Member States.

The 2015 Budget speech by the Irish Minister for Finance mentioned that Ireland is taking steps to develop a "Knowledge Development Box" (KDB). Most people took this as meaning that it would be implemented in 2015. This is not exactly what the minister said.

The Hazard of Phenomenal Success


Previously, we have seen how even some large firms do not have a formal IP Strategy.

We have looked at how entrepreneurs can plan for success by making provision for IP rights they will need even if they do not develop them along the way to success.

But what if you are wildly successful?

What could go wrong?

Labels: ambition, disruption, incumbent, out of the ballpark, strategy, success

The report outlines the significant activities to date in preparing for the UPC as part of the broader Patent Package.
Read more ...
Posted by Raymond Hegarty, FDI CEO, IP evangelist at 1:32 AM 0 comments

The history of entrepreneurship is replete with tales of failure. Failure followed by dusting yourself off, getting up and trying again.

It may not be catastrophic failure. Sometimes it is trial and error ... testing what works and what doesn't ... changing the mix ... until the recipe for success reveals itself.

What are the implications for IP? Well, I mentioned in the previous post that few firms - large or small - have broad awareness of IP strategy.

Consider what this means for entrepreneurial firms who eventually make the grade.

IP Strategy and awareness in the UK

The UK Intellectual Property Office has invested a lot of effort into raising awareness among UK firms. The primary focus has been on micro, small and medium sized firms on the assumption that larger firms have a higher level of awareness.

A survey published in 2006 confirmed the assumption. IP awareness increased with the size of firm. The same research was repeated in 2010 and yielded similar results about awareness as well as marking an increase in the overall awareness in the intervening period.

This didn't surprise me. I have commented previously about the prevailing climate that promotes such awareness.

What really surprised me was the low level of firms with an IP strategy.

Today's Financial Times has an article with the headline "Asia ahead in race to develop graphene". This is a technology that the British Chancellor of the Exchequer described as a "great British discovery". However, the UK has only filed 101 of the 11,372 patents and patent applications filed worldwide in the field of graphene - a mere 0.9% of the total. Asia has filed 7,318.
Read more ...
Posted by Raymond Hegarty, FDI CEO, IP evangelist at 10:01 PM 1 comments

Raymond Hegarty, FDI CEO, IP evangelist
Raymond Hegarty brings a depth of experience at the Director/CEO level in managing high-growth international businesses. He has managed 5 FDI start-ups in Ireland. He is an international authority on commercializing intellectual property and is the first Irish person to be recognized by Intellectual Asset Magazine among the world's “Top 300 IP Strategists.” He has managed billions of dollars of transactions in America, Asia and Europe.