skip to main | skip to sidebar

Blinding flash of light - why people don't "get it"

Why have they not “got it”?

In a post at the end of last year, I wondered why I had got it wrong. I searched for reasons for companies not jumping into IP commercialisation.

However, there is another explanation of why governments, policy makers and even sophisticated companies have not “got it”.

First let me set the scene: 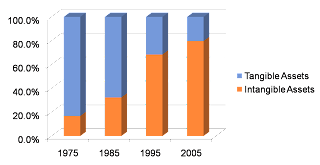 Often I have quoted the Ned Davis Research that found that in 1975, 16.8% of the market value of the S&P 500 companies was attributable to intangible assets. By 2005, the ratio had grown to 79.7%. This is an impressive change in economic structure over a relatively short period.

But the story does not stop there.


If there is a flip from roughly 83-17 to 20-80 in the relationship of tangible to intangible, then management should also have totally flipped (in the conventional sense of the word). The IP community is frustrated that the rest of the world has not “got it”.

There is a perfectly good reason

Maybe nobody has ever seen it, but I can explain in a simple way. It is simple but provocative. Modesty prevents me from describing the next sentence as “profound”.

If most policy and senior businessmen are the same age or older than I, then they had their formative years and were educated in the era when everything was tangible.

If they stick with that paradigm and follow the respected Pareto’s Law, then they will naturally look to that 80% group of assets that they expect are tangible. Looking at the beach, they miss the sea of intangible assets spread out in front of them.

Any evidence that the 80% has now flipped to the intangible realm conflicts with the bedded-in paradigm.

"Does not compute" "Does not Compute"

Maybe I should stop preaching to the CEOs and hope that their kids will listen instead ....
Posted by Raymond Hegarty, FDI CEO, IP evangelist at 9:08 PM

Raymond Hegarty, FDI CEO, IP evangelist
Raymond Hegarty brings a depth of experience at the Director/CEO level in managing high-growth international businesses. He has managed 5 FDI start-ups in Ireland. He is an international authority on commercializing intellectual property and is the first Irish person to be recognized by Intellectual Asset Magazine among the world's “Top 300 IP Strategists.” He has managed billions of dollars of transactions in America, Asia and Europe.